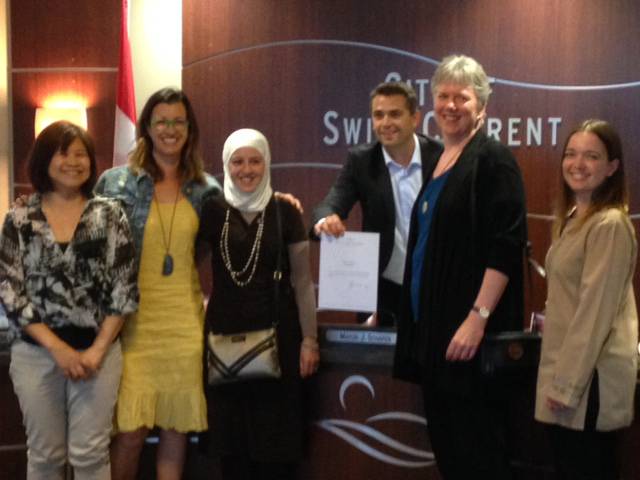 Tonight at Swift Current city hall, “Refugee Week” will be proclaimed by council.

The purpose of the week is to celebrate the contributions of refugees in Swift Current and the country and to encourage awareness and understanding.

“The first World Refugee Day was declared to grow and build the burgeoning relationship between refugees and the citizens of their host countries – and in part as a response to hostilities seen in the media and in some parts of society directed towards refugees and asylum seekers,” said the coordinator of Refugee Week, Anika Henderson.

Tomorrow night at  7:00 pm,  there will be a round table talk at the library with community members of all different faiths. On Wednesday, a  Lunch n’ Learn  will be held at the Swift Current Museum  to learn about the refugee history in Saskatchewan, and the Lyric Theatre will feature Molly Thomas’ documentaries, “Trapped In Iraq”, as well as “Syria’s Lost Scholars”.

On Thursday night, the First United Church is hosting an ESL Expo, a showcase of the diversity in the Southwest and lived experiences, also featuring a puppet show. The celebrations draw to a close at Market Square on Saturday from 11am to 1pm with local music, a children’s book reading and greetings from local dignitaries.

“Here in Swift Current, we’ve seen an incredible community that’s opened their arms wide to these new families. Through continued education and information and the sharing of what the realities of being a refugee are, from a refugee experience point of view, we want to encourage our community to continue with what they are already doing to help and provide information on new ways and opportunities they can embrace to become even more welcoming,” Henderson said

A link to the Swift Current Refugee Week page.